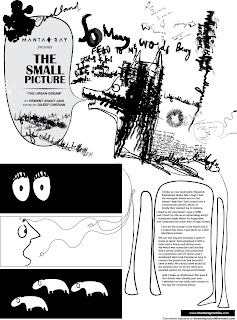 Published in Mint on 18th January. http://t.co/WF8pieW1
I woke up one dark night. Haunted, frightened, shaky like a leaf. I had the strangest dream and in that dream I saw that I had turned into a consumerist zombie. Made of words they wanted me to believe.
I lived in my own luxury cage of EMI, and I lived my life as an advertising script. I consumed sugar water for happiness and I replaced my brain with an app library.
I had all the money in the world and if I missed the trees, I saw them on a LED tv screen.
My car had a toilet and my world was controlled and the sky was blue, projected on an anti UV dome. And I wondered what took humans to convert this planet into a cave of steel. We should have killed all the animals and cut all the trees and spewed carbon by tonnes much faster.
And I woke up frightened. Not sure if that dream was already part real. I switched on my tablet and turned on the app for counting sheep.
Posted by Munna on the run at 19:22