Of foreign hand, circuses and other such. 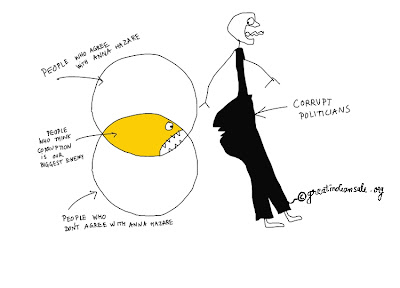 Is that a foreign hand or are you just excited to see us selling India?

There is a foreign hand behind this uprising of people. There is no doubt about it. The government has been selling the nation to companies like Vedanta – foreign, Monsanto – foreign, POSCO – foreign. In fact the whole development model that the government follows is so foreign that people are really fed up and have taken to the streets.So, yes, there is a foreign hand. The movement is to take it out of the corrupt politicians’ a$$e$.

The Liberal’s view of the uprising – It’s a circus

Oh well, some of us are upset about the show and chaos and music and drums and tamasha. Well, guess what, that’s what a revolution in India would look like. Those sadhus and charlatans and unkempt people and crazy histrionics and Gandhigiri and all that is as Indian as you or me. When the revolution comes, these are the people we will be fighting shoulder to shoulder with. Let’s accept it. The revolution we read about in our books and saw in our minds will make for a great play and a great book. Let’s write that book. We’ve had enough of trashy literature anyway. Meanwhile, the real revolution in India will be non-violent and it will be fought on Gandhi’s principles. Nothing else will work in this country. Nothing else has.

Where were these people when other struggles were happening?

In their homes. Trying to figure out where the hell will they get their next dal and roti from. Trying not to eat tomatoes and cut down on onions. You think that is not a struggle? And these are the people who are out on the streets. How is their struggle to live a life any less than a Niyamgiri or a Dantewada?

In the last 65 years, this is the first time, and probably the second time in our history as India that one man has brought the entire nation together to fight against the disease that is eating the country alive. If you don’t see greatness in that, check your eyes and hearts for their expiry date.

I do agree that Anna because of his humble demeanour and untainted character, brought an entire nation together to fight corruption. But somewhere his clarion call to fight grafting has been lost in the chaos. And we ought to understand that this evil called corruption can only end when each one of us become an Anna or a Gandhi. We have become very comfortable with bribery. That comfort has to wade away. We have reached a stage where we are confident that a few extra bucks will help us get the job done in no time. The Lokpal is a good initiative, but can it guarantee an end to corruption?

I know I may have deviated from the topic, but because there was a mention of Anna, I put my point across. And thank you so much for giving me fodder for thought.

And the other instance being?

I totally agree with Anonymous. Irom Sharmila has been fasting for the last ten years. But Manipur is far away for the media to access compared to Ramlila Maidan. So she's a forgotten soul. And moreover she's not wearing a Gandhi topi and not trying to be an amateur Gandhi either. Ther's no show that's being put up. No celebrities endorsing, no one tweeting for her. And who cares for the north-east!

I completely agree with Anonymous and Mira. In one sense, it's http://www.thehindu.com/opinion/lead/article2379704.ece.On the other hand, it's the unease with a 'movement' funded precisely by the corporates who lie behind it all, and with a man whom we know has been doing terrifically strange things such as upholding the rigid caste system back in his own village with an iron hand.