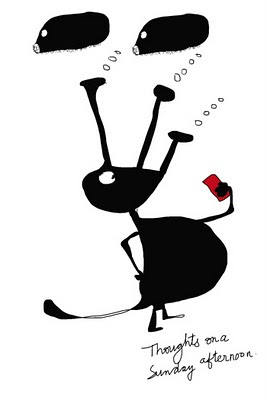 Some of these guys wandered right into my mind. I asked them what brought them there. They had some horrid tales to tell. I think I must write down what they had to tell me. They also mentioned their friends. I should perhaps meet all of them and report back. In the meanwhile, in the real world, India is about to lose its food security to Monsanto. The Bt Brinjal consultations are over, and our minister has brushed aside NGOs as undemocratic. It has already been found that Brinjal was conveniently denotified from the biodiversity list. So all those consultations may have been just a bloody sham.
Some other things I found last week:
Bt Ajit is a genetically modified cotton brand, named after Sharad Pawar's nephew.
The church of England withdrew its holdings from Vedanta citing gross abuse of human rights.
I also overheard some people calling children of the slum 'kutte billi ke bachche'.
I also found that I am beginning to get terribly disillusioned and hopeless.
That was before I read some people remark on twitter, "I don't care about Bt Brinjal."
Right.
Posted by Munna on the run at 08:50

don't you dare...
because when I lose hope, I look up at your blog to find energy to shout again. don't you dare!

There's a mantra I live by(though its quite tough at times)--'Care for the world but dont get consumed by it'...there's a loaded term for that -- dispassion. Be brave! Be happy!

By the way, love your illustrations!