Click on the images to enlarge and see the cyclists! 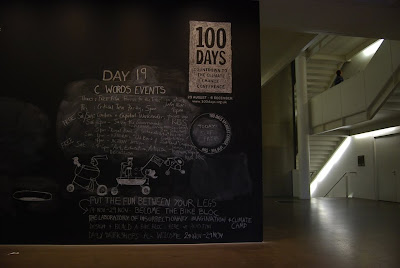 “I hope we have grown up to become much more disobedient, because life on this world of ours may well be terminated because of too many acts of obedience.” - John Jordan

Everything we take for granted was won over by disobedience. As I watch the video my mind wanders to a few months back. John told me about The Laboratory of Insurrectionary Imagination’s new experiment: the Bike Bloc.

When I watched the video these guys made, a few days later, I wanted to get my hands on a bike and cycle to Copenhagen. Such was its call. I suggest you take your headphones, crank up the volume and watch it.

Civil Disobedience. When one looks around to see a world being driven by the blind fanaticism of consumerism, one can almost feel the call of Gandhi. And countless others who have used this most powerful tool of protest. I think the time has come to have another Dandi March. This time about people’s rights. To their land. To their food.

Vedanta in Orissa. Minining in Goa. Chattisgarh. And the imminent threat of losing our food security and health to GM Crops and monopolistic companies. If that doesn’t take us out on roads, what will?

December 7 - December 18 will see the world converge upon Copenhagen. And we can be sure we will have no fair, ambitious and binding deal. The DNA of consumerism isn’t that hard to break.

But on December 16, walk out of the Bella Center and you will see the beginnings of a world wide revolution. You will see a new symbol of civil disobedience.

It isn’t just, ‘a huge "carnivalesque" installation out of old bikes that it may use to blockade the streets in Copenhagen or to trap fossil fuel lobbyists in their hotel.’ It is a the slow, but steady turning of a grassroots revolution that is sparking off around the world. Still not united. Still a spark here and a spark there.

But Copenhagen will change all that. Never before have so many common people been mobilized by a common passion and vision for a better planet. And if you can’t hear the voices, turn off your television and take a walk in the streets, wherever you are.

this is so brilliant!
- window siller. :D

Invitation to journalists participating at COP15 in Copenhagen

Wonderful world of cycling – why do the Danes bicycle?
- An introduction to Denmark as a cycling country.
Thursday December 10th from 12.00 – 16.00

Join us for the afternoon and find out why the bicycle is so popular in Denmark. We will take
you for a bike ride in Copenhagen, you will experience Danish cycling culture and meet experts and authentic Danish cyclists.
Denmark is known for its cyclists. A large number of cyclists are an essential component of
reducing CO2 emissions and congestion on the roads of cities, and more than one-third of the
population in Copenhagen and other Danish cities ride their bikes to work or school every day.
Our trip into Danish cycling culture begins in the Bella Center, the Venue for COP15.
We have bikes ready for everyone; if you are unable ride a bike, we will arrange a bicycle taxi.

Experts in infrastructure, city planning, bicycle parking, culture, and architecture will lead small groups
on short trips around Copenhagen. On the tour we will introduce you to what makes Copenhagen a
great place for bicycles.
The cycling tour will end at Copenhagen City Hall where you will be given a short presentation from
Danish cycling experts. At City Hall, you will also meet normal Danish cyclists and have the opportunity to
conduct interviews and take photos.

It is necessary to register here: http://dcf.dk/worldofcyclingtour.
Once you’ve registered, you will receive a confirmation with more practical information about
the session.
The event is free of charge and is reserved for journalist and others who work with communication.


Behind this event is the Cycling Embassy of Denmark – a comprehensive network of private companies,
local authorities and non-government organizations working together to promote cycling and communicate cycling solutions and know-how.
www.cycling-embassy.org

Those journos who attended pease drop a line - even a oneliner comment - to aldrin naidu at aldrinnaidu@yahoo.com and tell him how it went. Thanks