Blog Action Day 09 Special. Are those brinjals in your brain, or are you just happy to read this post? 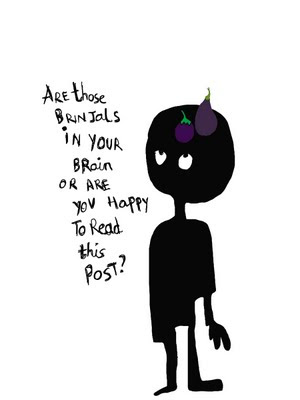 Screw the science.
That’s the rule, the climate sceptics, companies and their lobbyists seem to play by.
And then one day before the blog action day, this happens.
A Monsanto owned company files a report saying how good Bt Brinjals are. Also known as GM foods and so on.
A committee approves the report and lo and behold the Bt Brinjals get an, dramatic music please, environmental clearance!!!

What a dark day for India.

And many such dark days later, Bt Brinjal will be unleashed upon Indians. The first food crop to be tested on humans, anywhere in the world.
All in the name of climate change – lack of food – the immense power of GM Crops logic.
Of course, Europe has banned GM Food. There are massive protests in America. But India, as always remains open for exploitation.
Because our minister says: there are arguments for it, and there are arguments against it. And we will decide once we have looked at all the arguments.
So, what have we been doing all these years?

Let me present some quick facts.

The Genetic Engineering Approval Committee (GEAC, the clearing house for all gm crops in India), has cleared Bt brinjal on the basis of test results submitted by seed company Mahyco, which has developed the crop.

Mahyco is owned by Monsanto.

Activists managed to get their hands on Mahyco’s test results through a Right to Information petition. They sent the results to several independent scientists for review. Two scientists got back. Their analyses showed inconsistencies in Mahyco’s interpretation of the test results.
They also showed the tests were inadequate.

Mahyco claimed it did not find any significant difference between Bt brinjal and non-Bt brinjal in the biosafety tests. The company said it carried out toxicity and allergenicity studies on rats and its impact on soil microbes. It also assessed the impact on beneficial insects and the environment. Based on these, the GEAC cleared them for large-scale field trials. But the data is generated and analyzed by the company itself, said Suman Sahai, geneticist and convenor of the non-profit Gene Campaign. “There have been instances when companies have fudged data for obvious reasons.”

This is no college, and we are in no classroom debate session. This is about the health and safety of a billion people. This is about food safety. This is about food standards. And if you don’t know how harmful genetically modified crops are, even after there is so much science that proves it, say so. Admit that you have been ignoring the overwhelming proofs against GMOs. Do whatever, but don’t pass that law which will cause an irreversible damage to our country, our environment, our health and our food security.

And if a debate really helps, I invite our environment minister to an open public debate on the issue. I am no scientist. I am an ordinary Indian, but I have something that will make me win this debate.

Please write a letter to our environment minister. Click here.