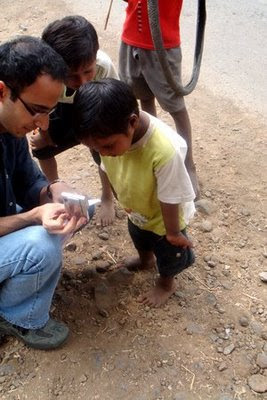 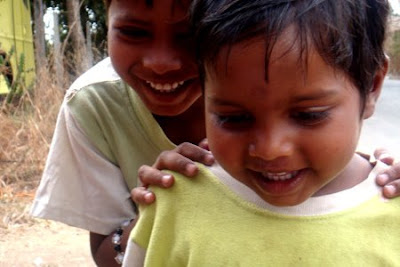 Just about a year ago, we were shooting a film in a studio located in the outskirts of Mumbai. It wasn’t going according to plans and we got outside to get some fresh air.
Three kids came by and we took some pictures. The little kid was fascinated by the digital camera when we showed him. For about fifteen minutes he marvelled at how he could see himself on the screen.
The he got bored and moved along with his brothers.
We learn to be amazed, get familiar and be amazingly bored by technology in a matter of days, if not minutes.

A year on, technology has exploded in my life.
Digital or die. That’s the catchy new mantra for the new age advertising agencies. The business of advertising has changed and a lot of us around the world have been left running, panting, exhausted in trying to keep up with this rabid advance in technology.
Back home in the ad world of India, there is talk about digital. Cautious talk. Some are trying to justify the analogue. Some do not know what exactly to make of the new age.
But in November twitter showed us a glimpse of the future.
The twittering that happened during the Mumbai attacks was phenomenal for two reasons. One for the revelation of how technology will work in the future. And two, that it happened in India.
Here is a country where a massive percentage of the population doesn’t even have access to basic food and education. And the remaining are sucking the last drop out of the 156 kpbs juice. That twitter would become big overnight because of those 4 days in Mumbai, is a topic better googled than written about here.

The world truly has moved on. Back in the days, as they say, advertising used to influence popular culture. What I have begun to notice is a reversal. The people are beginning to influence advertising. How many times have we seen youtube videos rip offs by ad agencies.

And while we grunt a few decibels of denial, thousands, if not millions yet, people are twittering in India. Some updating their friends with their bowel movements, but some using the technology for powerful, meaningful purposes. Like this tweet I found from Wildlife SOS India.

We learn to be amazed, get familiar and be amazingly bored by technology in a matter of days, if not minutes. And it will be interesting to see how soon the ad world grunts off its denials and embraces this new world. Before people get bored and move on to newer things.
Posted by Munna on the run at 17:35

we are planning to start a daily reminder to the world climate change end at the notice board at our college(JIITU,noida)

your posts and caricatures?for free??

Technology surely has changed the dynamics of advertising and it's amazing how these trends just manage to hang around for a while. By the time you realize, your communication is outdated!