An unintentional experiment in Prejudice. 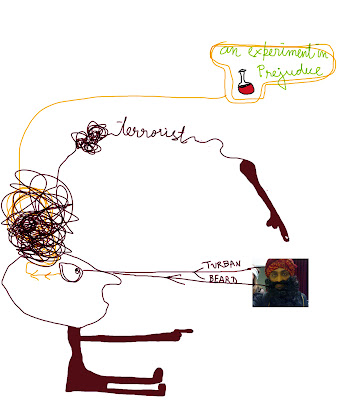 Results:
These are the reactions from about 25% of those present.
“So you are dressed as a terrorist!”
“Why, do terrorists announce their presence by a certain appearance?”
“Aha! Terrorist!”
“So are you dressed as Osama?”
“Is that bag supposed to be full of explosives?”
“No that’s my office bag which I will leave at the cloakroom.”
Two gentlemen chose to continuously make gun sounds behind me as we walked to the venue.
Fed up after a while, I started answering, “I am dressed as the quintessential terrorist cliché!”
I got the un-PC award for my getup.
And all I wanted to be was a Jaisalmer Rajput.

A year ago I made a book about prejudice. Never believed it would be so true even after the world watched three days of Mumbai terror unleashed by clean shaven youngsters who looked like any average college going students.

oh my god. shocking, how prejudiced the whole thing is. a simple rajashtani man. and thats how they perceive him?

Excellent take on the subject!

Thank god for them, we don't call every white man talking to an Indian kid, a pedophile.

Bizarre! But can't blame them because their media keeps showing bearded men as sinister Osamas and his ilk. Rajasthan is not a Goa for them.