The Battle of Bombay 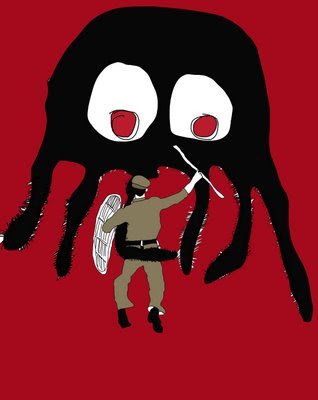 The loudness of anger rises like the tide and fills the sewers up and spills the water on the roads and floods them and make people swim in it. The loudness of anger subsides and leaves grime on the roads and leaves us watching aghast at the mess that can make a city rot. The loudness of anger is a good thing. We need the deafening to hear our inner selves. To lay bare the muck that covered our eyes.
And what do our inner selves say?
That the news channels are crap. That.
That the politicians are the cause of all this. And that.
Kill fundamentalism. That too.
Politicians, shut the fuck up. And that.
I think everything that is being said is right. In some measure or the other.
We are all traveling on the same rocking boat that perhaps will cringe and suffer and break and split, but will never sink.
It’s easy to rattle India. It’s impossible to sink it.
The video from CST showed people catching the terrorist and hitting him.
If they come as ghosts in the night and take over our hotels like scared, ball less fucks that they are, they can kill some of us.
But if they come out in broad daylight, we can take them on empty handed and we will take their guts out from their throats and we shall make them hang like drying meat for a fly feast.
They have started the The Battle of Bombay.
This isn’t a battle against anyone. This is a battle for India.
The anger will subside and our fuckhungry politicians will start raping sense. And nonsense.
But this time let some things begin.
Let us call for police reforms.
Let’s depoliticize the police.
Let’s give them better arms and better training and better salaries.
Let the corporate India step up and tell it to the government that this will have to be done.
And the next time a politician asks for bribe for a posting, his ass should be stuffed with one crore rupees in denominations of one rupee coins.
Let the battle of Bombay begin.
Police reforms first.
Posted by Munna on the run at 12:48

That was angry, Hemant. Good reading.

Says it all...time the 'spirit' of mumbai resulted in palpable action